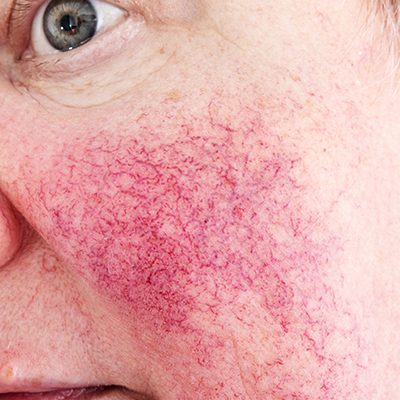 Rosacea is a chronic disorder affecting the central parts of the face that is characterized by frequent flushing; persistent erythema (ie, lasting for at least 3 months); telangiectasia; and interspersed episodes of inflammation with swelling, papules, and pustules.2 It is most commonly seen in adults older than 30 years and is considered to have a strong hereditary component, as it is more commonly seen in individuals of Celtic and Northern European descent as well as those with fair skin. Furthermore, approximately 30% to 40% of patients report a family member with the condition.

Telangiectasia or broken capillaries are common in areas that are easily seen (such as the lips, nose, eyes, fingers, and cheeks). They can cause discomfort, and some people find them unattractive. Many people choose to have them removed. Removal is done by causing damage to the vessel and forcing it to collapse or scar. This reduces the appearance of the red marks or patterns on the skin.

Both these conditions can cause the skin to look red and flushed, and further aggravated by UV exposure, caffeine, alcohol, exercise and spicy foods. 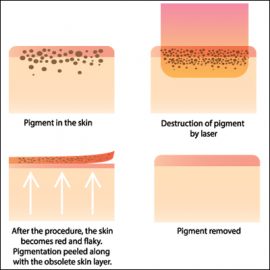 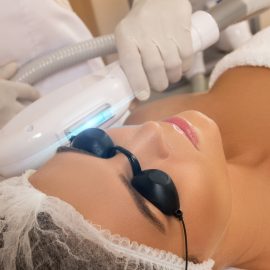 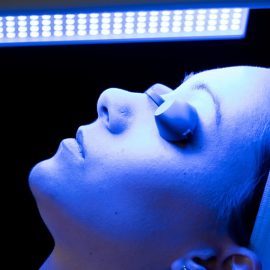 "Therapist was really skilled and gentle with waxing. Made me feel comfortable and communicated really well. Would definitely recommend this place to others"

Had a lovely Medik8 facial with microdermabrasion and eyebrow waxing by Lucy last Tuesday and the results were amazing. Super soft and glowing skin, and perfect eyebrows. Love the Medik8 products used!

Friendly and great expertise and not pushy

Couldn't be more happier with them. I highly recommend!

"Hi Dr Aarthi, great results with the age spots on my hands. I'm thrilled! Thank you!"

For professional permanent hair removal and laser rejuvenation, I recommend Bay Medical Aesthetics! Where you will be provided with specific & professional service for your needs. Great friendly therapists.

"I feel very confident having laser by a medical practitioner compared to a therapist with laser training. I was contacted via text post laser for a follow up and check however experienced no negative side effects."

"Was very professional and advanced - and so well priced. I feel confident that it’s coming from Dr Aarthi- she explains everything and the other facialists are really good as well. Finally someone who knows what she is talking about and accessible! I’ve been trying to clear my skin for so long - I can’t tell you how many other laser clinic I have been too selling me products and nothing made an impact. But ive had carbon and peels just after a few treatments it’s looking clear and radiant. Will be coming here from now on and highly recommend it."

"Thank you to the beautiful staff for a much needed pamper session just before my wedding. I would highly recommend this place for any beauty needs, highly qualified and amazing customer service x"

"Hi, Dr Aarthi, all good and really notice the difference! Thank you again for all that you do." (Full face anti-wrinkle and dermal fillers)

Friendly and thorough service - you'll be seeing a lot more of me!

"So happy with results from my treatments :D"

"Definitely recommend this clinic to you!!! Dr Aarthi is awesome!"

"They know what to do and how to do it well. Now my family go there. Extractions a must to unblock one's face! Great for kids also!"

Lucy was fantastic and my skin is feeling great. Highly recommend.

"What I like about this place is that it's clean and everyone is really professional".

Professional and friendly staff in a clean environment. Extensive knowledge of latest technology in the field of skin rejuvenation and hair removal. Higly recommended.

Great value for an outstanding service

Friendly staff and great service. A monthly pamper and I leave feeling relaxed and my skin looks great.